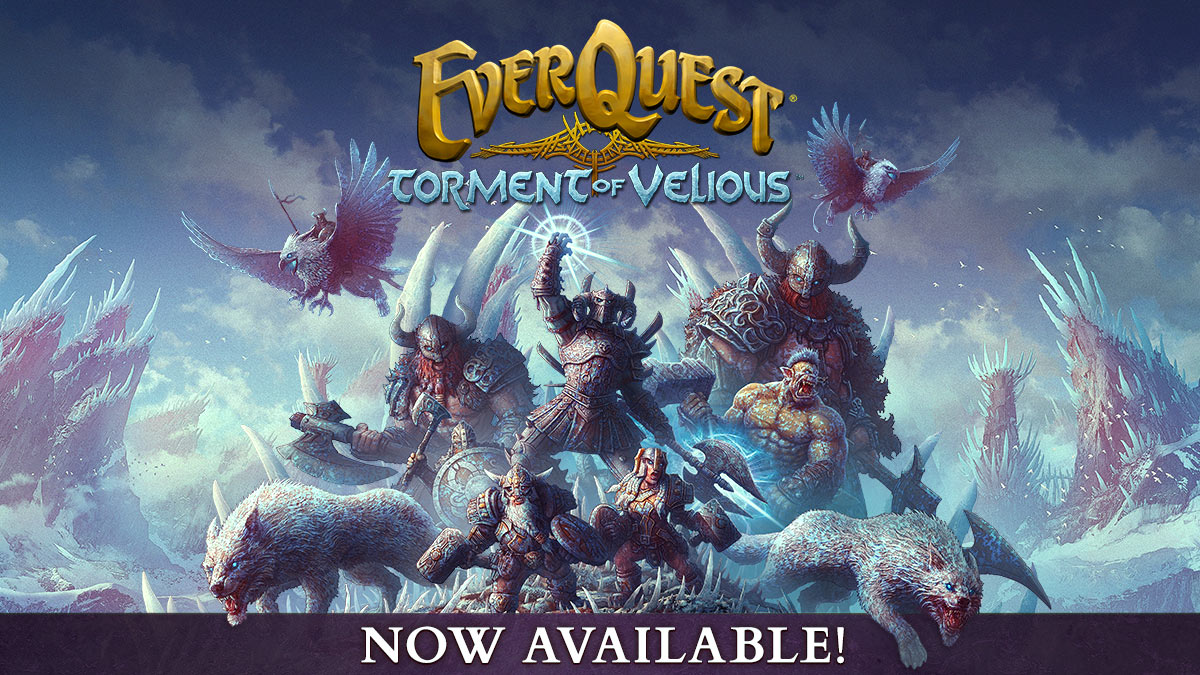 Torment of Velious is now open for business on the live servers! If you haven't purchased the expansion, you can do so here or click on the image above.

We have been busy collecting information from beta and here is what we have so far.

All items we uploaded from beta have a ToV tag as well.

All achievements should be created and ToV tagged.

Many quests have been created as well.

A large majority of NPC's are entered in and are ToV tagged. If you have drops for these NPC's, feel free to post on their npc page with the drop name.

We'll work on getting items linked where they need to go.

Our ToV wiki still needs some work but we went ahead and opened up some pages for viewing for now. We'll open the rest when we get more info on them.

- The lands and denizens of the continent of Velious are suffering. The icy landscape has seemingly come to life and is flowing oddly upward toward the sky. This restless ice is infecting and animating the inhabitants it touches, turning them into zombie-like beings with a strange icy infection that appears alive in its own way – moving and shifting over their bodies. What has caused this strange turn? And what could it mean? All adventurers are called upon to unravel the chilling mysteries that are the Torment of Velious.
- See Belinda in Northern Desert of Ro to get there.
- Increased the maximum level cap to 115.
- Added a new key ring for Hero's Forge armor pieces and suits.

- New AA abilities for level 111 to 115 characters.
- All - Adjusted the AA ability window descriptions and spell descriptions for all ranks of every AA line that was upgraded with new ranks for Torment of Velious to include spell description links and more accurate information regarding how each ability functions.
- Multiple - Made the following changes to Cleric's Exquisite Benediction, Druid's Nature's Boon, and Shaman's Call of the Ancients:
- - Reduced the initial reuse time from 30 minutes to 20 minutes.
- - Granted the ward immunity from damage so that it cannot be killed early.
- - Changed the healing spells cast by the ward from a heal over time cast every 10 seconds to a direct heal cast every 6 seconds and increased the base value of the heal.
- - Increased the range of the ward's heal from 60 to 100 feet.
- Bard - Changed Selo's Sonata to cast the highest rank of Selo's Accelerando that you have scribed and added a passive effect that extends the duration of Selo's Accelerando by 2 minutes.
- Cleric - Adjusted buff stacking on Divine Avatar to reduce conflicts with other buffs.
- Magician - Changed the pet summoned by all ranks of Servant of Ro to follow the caster when out of combat, improved its survivability, and increased the damage done by all ranks.
- Necromancer - Changed Gathering Dusk from a delayed damage over time effect that is applied after an initial hatred generation period to an activated damage over time effect that blesses the caster with a buff that both increases DoT damage and negates Spell Casting Subtlety for 24 seconds.
- Necromancer - Added additional ranks of Embalmer's Carapace from levels 85 to 110, reduced the damage absorption total of the existing ranks, and reduced the reuse time from 20 minutes to 15 minutes. Extended the duration of the buff and removed the hit limit from all ranks. Replaced the self damaging component that was previously triggered after the rune expired with a self damaging component that is active during damage absorption. Removed the critical DoT damage modifier from this line and increased the critical DoT damage modifier for ranks 7+ of Spire of Necromancy.
- Necromancer - Renamed Gift of Deathly Resolve to Heretic's Twincast and modified the functionality of this ability to match that of Improved Twincast.
- Paladin - Changed Marr's Salvation from a single target buff to a targeted group buff. Increased the duration of all ranks to 10 minutes and the recast time of all ranks to 5 minutes. Adjusted the levels and expansions that each rank is made available to more closely match the Shadowknight ability Voice of Thule.
- Ranger - Consolidated Outrider's Attack to be ranks of Outrider's Accuracy and modified all ranks to grant the bonuses of each ability. Adjusted the levels and expansions that each rank becomes available for purchase.
- Rogue - Changed all ranks of Envenomed Blades to a toggled passive ability and adjusted the damage based on its previous uptime.
- Shaman - Adjusted buff stacking on Rabid Bear to reduce conflicts with other buffs.
- Warrior - Removed the self damaging component of Warlord's Tenacity.

- Rare spawn bonuses will no longer prevent Telgrith, Black Legion Captain from spawning in Direwind.
- Capped strikethrough values on non-raid NPCs from Underfoot to Torment of Velious. You should see fewer strikethroughs, especially from higher level NPCs.
- The ghostly student in the Tower of Frozen Shadow who appears in odd places on the 6th floor has found his way back to the 2nd floor library.
- Spells cast by NPCs in Heroic Adventures will scale more appropriately at higher levels.
- Level 106-110 NPCs in Heroic Adventures now base their stats on tier 1 Ring of Scale instead of tier 1 Empires of Kunark.

- Increased the abilities of level 111 to 115 mercenaries.

- Accelerated the unlock schedule of Rain of Fear and Call of the Forsaken later tiered content.
- Decreased turn-ins required to unlock the druid rings in Shard's Landing.

- Customers browsing a Buyer or Trader in the Bazaar will be prompted to re-open the Merchant/Barter Window if there is a price change before they are allowed to complete a transaction.
- Vex Thal - Fixed a bug that would send players to the zone in if they got too close to some walls in the rooms where the various Khaas Thox Aten Ha Ra hang out.
- Fixed a crash that can occur at the server select screen.
- Fixed a problem in Valdeholm that was causing characters to fall through the world if LoD bias was set to low.
- Granted access to Ring of Scale content for free to play players.

To make a Donation directly to me.
https://paypal.me/Gidono
So far I have received 2 donations.
▲ Page top
Post Comment